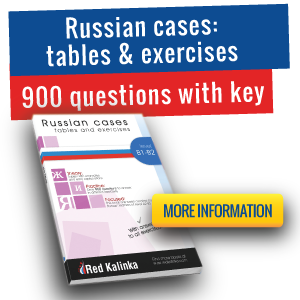 Our language experts have gathered here the most common and interesting questions about Russian grammar and vocabulary. Discover the secrets of Russian verbs, case system and pronunciation.

It's very easy to mix up the words "ли" and "если" when you learn Russian because both words can be translated into English as "if". In Russian they are quite different from each other. Let's see how to use them correctly.
We use "если" to express a condition:

We use "ли" to express a doubt about something. You can also translate it as "whether". In fact, try to associate "ли" with "whether" in your mind and you won't mix it up with "если" any more. Let's have a look at the examples:

Where should I put "ли" in a sentence? We usually put "ли" after the word that expresses the actual doubt. Compare these sentences:

As you must have noticed the "doubt" always comes first in the subordinate clause. If you change the word order you will also change the focus of the doubt.

Saying "I have" in Russian is a little tricky because we don't use the verb "to have" in this meaning. Instead of this verb, we use the construction "У меня есть..." which literally means "In my possession there is..." Let's have a look at some examples:

As you might have noticed, after the preposition "У" we have to use the genitive case (у меня / у тебя / у него / у неё / у нас / у вас / у них). The thing that we possess is used in the nominative case because it's the subject of the sentence.

You probably know that in Russian we use the construction "У меня есть + the Nominative case" to express possession ("I have..."). However, there are sentences where "есть" is omitted. It happens when instead of expressing possession, we give a characteristic of something. Let's see some examples:

Attention! We often omit "есть" when we describe people's appearance. The most common mistakes among Russian students are the following:

If you forget to omit "есть" these sentences sound a bit funny for a Russian ear. Since "есть" expresses possession it sounds like you are saying "I have eyes" rather than saying that they are green.

Pay attention to how you can express negation in these situations. You just have to put "не" before the word you negate:

If you use "нет" you will negate the fact of having something whatsoever. For example:

9. How should I use "нравиться" in Russian?

When you translate “I like” into Russian you might have some difficulties, as the verb “нравиться” is not exactly “to like”, but rather “to be liked”, or “to be enjoyable, pleasing”. Compare:

Pay attention that "the book" or "what you like" is in the nominative case because it's the subject of the sentence and the verb “нравиться” agrees with it (depends on its gender and number (singlular or plural)). Accordingly, "the one who likes" would be in the dative case:

When "what you like" is expressed by an infinitive, "нравиться" will be in the 3d person, neuter. For example,

Note that the verb "нравиться" has all the conjugation forms": "я нравлюсь, ты нравишься, он нравится, вы нравитесь, мы нравимся, они нравятся". But be careful! The grammar structure is the contrary to the English one, and it looks very misleading. Compare:

Attention! The perfective form of "нравиться" is "понравиться" . It means that you will mostly use it for a single occasion and/or with a certain result in the future or the past. Important that we use this form to express our opinion (= in English: I love it! I loved it!). For example:

Cases help the words show different meanings in a sentence. Nouns, pronouns, adjectives and numbers can have cases in Russian. That is to say, their forms change according to their purpose in a certain sentence. For example, thanks to the cases we can see subjects and direct objects in a sentence regardless of their position:

Attention! Word order in Russian is not fixed (but not random). We have neutral word order (the most usual one), but we can change the word order if we want to indicate new information or somehow underline it.

So, the word order won't change the meaning drastically. However, let's see what happens if we change the cases. For example, if you change the word “червяк” into the accusative case (=direct object) and leave the ending of “груша” in the nominative case (=subject), it will mean the contrary:

Another important reason for the usage of the cases is that in Russian we quite often use omission of some sentence parts. For example:

We want to help you learn Russian. Do you want to receive news from us? Subscribe to our newsletter. You will only receive one email a month with 100% news and 0% spam: